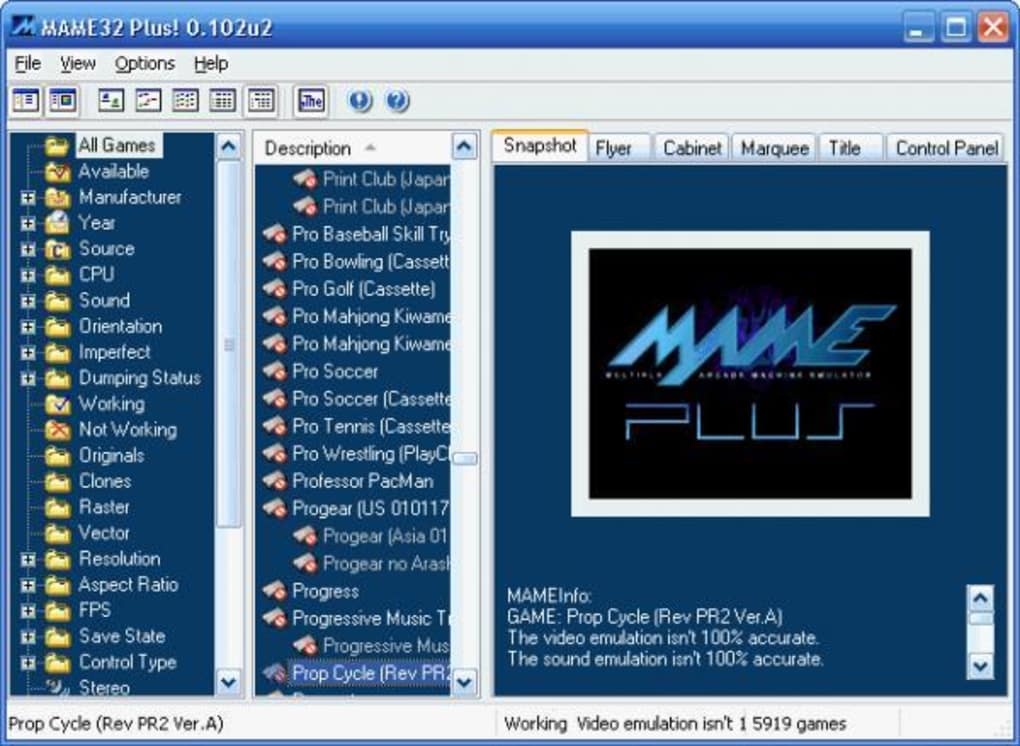 Mame Emulator – MAME or Multiple Arcade Machine Emulator is an open-source emulator. MAME can be used for playing thousands of classic arcade games. It was developed to recreate the hardware of arcade game systems.

The prime intention was to preserve the history of the played games. The present version of MAME 0.162 has followed its sister project MESS or Multi Emulator Super System. So you can use MAME for playing classic console games too.

The version 0.171 of MAME has a simple “DOS-like” menu. You can select games as well as alter configurations. You can also use other options like MAMEUI port or frontends. MAME is available as Liberto core, and hence, it is possible to use RetroArch as a frontend.

Arcade games are mostly coin-operated. It might strike you how to insert a coin. The input configuration will help you out. You can use keys 5 to key 8 on your keyboard for inserting coins. If you want to start the game, you have to press keys 1 to 4.

Multiple Arcade Machine Emulator or MAME emulator helps in recreating the hardware of an arcade game system. This enables you to run those games on your PC. The main intention of MAME is to preserve the gaming history of some of the most vintage games. MAME is capable of supporting thousands of unique games as well as ten thousand actual sets of ROM images.

Available for: Windows, iOS, and Linux

MAME is capable of coordinating several elements simultaneously. Each element can replicate the behavior of the hardware present in those arcade machines. MAME has to act as a layer of software between the platform and the original programming of the game. Features like refresh rates, arbitrary screen resolutions, and display configurations make it all the more attractive. It also supports multiple emulated monitors. Advance MAME is a bit different from MAME. It is compatible with Windows, MAC OS, DOS as well as Linux. You can use Advance MAME for working on television, machines, monitors, computers, etc. It has the license of GPL. You will be capable of playing arcade games with video hardware on PC monitors, LCD screens, TVs and so on. It has an arcade and fixed frequency monitors and provides enhanced video support. Advance MAME is a highly stable and fast emulator offering multiple operating support.

This is one of the latest MAME. It is capable of offering some enhancements. It cannot be run from a different DOS atmosphere. Def MAME is extra-legal. But playing games like King of Fighters 2002, Samurai Showdown, Metal slug four, etc. using illegal drivers is against the license policy of MAME.

This is a special version of NeoGeo games. It helps in adding 16-bit color support and extra keyboard mappings for challenging games. It has a C version, which is quite stable. You will be glad to know that Pentium optimized and AMD compilations are offered.

MAME plus offers multilingual support. Also, it enhances video effects. The project was started back in 2002.

This is MAME plus. It offers several options to MESS drivers. You can use it for home consoles like         N64 and SNES. Also, you can use this one for ROM hacks of your arcade games.

This is one is totally based on MAME. We can call it the duplicate version of MAME32. It intends to incorporate brand new options that are highly interesting. However, it should offer a multilingual feature so that the non-English users can also use MAME32.

WPCmame was developed as a driver in addition to the MAME0.37 beta eight supply. All regular MAME functions work in wpcmame that is record or playback, profiler, debugger, cheats, command switches, etc. It is important to know that the WPC game emulator is not 100 % playable. It only emulates the debugger, cheats, electronic circuit boards profiler, and also the show within the pinball machine backbox. It does not have a playfield or balls. You will need to activate switches with your keyboard to see animation and listen to the game sound.

Smoothmame was developed for gamers who are looking for silken swish displays in games. Smoothmame may be a win32 mame spinoff. All games in mame can run at precisely 60 cycles – that results in less flicker for several of them.

Visual PinMAME depends on the present PinMAME ASCII text file and is an associate degree emulation project. It creates a Windows COM object which is controlled by Visual Basic (a scripting language) Rom Center DAT File

You can call Metal MAME a variant of MAME. It has games remixed with the sound recording of the serious Metal Mega Driver band. You will have to download sound packs from the developer’s website.

If you ask us if MAME is safe to use. We would recommend downloading only those games provided on their official website. Also, read the policy disclaimer on their website.

You can download the MAME emulator, and download the .zip files of the games you wish to play. You may find your games downloadable ROMs to work with the emulator. MAME emulator works well with some demanding examples from the early 1990s like the ‘OutRun’, and vector games likes StarWars, Tempest, Asteroids, raster etc.