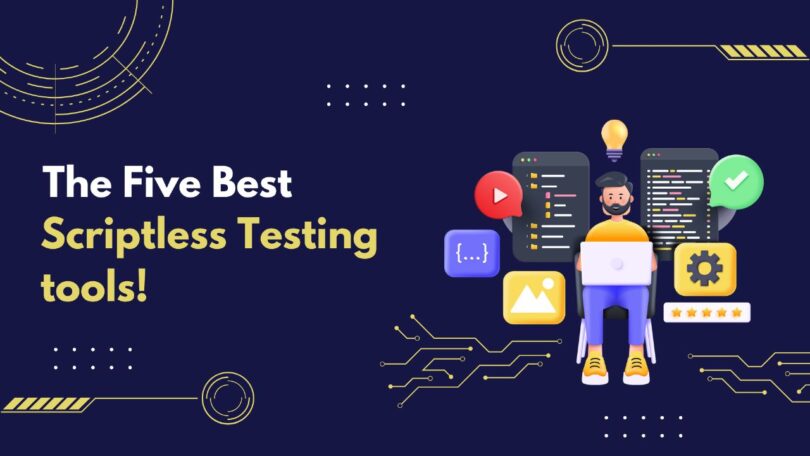 The pace of software delivery is increasing day by day!

Today, with the help of modern technology and automation, most companies are able to speed up the delivery process.

However, software testing is considered a significant bottleneck, and without any advanced test automation setup, software quality issues get magnified easily.

So is scriptless testing helpful in any way?

To analyze this, let’s detail scriptless testing and discuss how its tools can help overcome QA bottlenecks.

As the name suggests, scriptless testing is a method to automate tests without writing any test scripts. These tools are generally based on test automation frameworks like Selenium.

Scriptless testing tools can record the actions of a tester on the application screens as they navigate through features. The tool then generates the same by recording these actions for the test steps you’d generally write a test script for.

Since scriptless testing is executed using tools, different tools have their own testing limitations and capabilities.

How Does Scriptless Testing Work?

One of the most popular scriptless testing features is record & playback, i.e., simply recording the actions on screen and playing them back.

While the tester interacts with the web-based application, the steps of the test are generated simultaneously. These steps can be later executed on a browser.

Some scriptless testing tools also offer parallel and cross-browser testing, which means you can execute tests on multiple browsers parallelly!

With the TestGrid platform, users can perform both scriptless automation and manual testing of their web and mobile-based applications on real devices hosted on-premise or on the cloud in a scriptless manner. This allows for saving time & focusing efforts where it’s needed.

TestGrid platform helps your business and testing teams build and execute test cases without any prerequisites of programming knowledge. Additionally, with TestGrid, users don’t need to be concerned with rewriting different test cases, but they can reuse the test steps repeatedly.

ACCELQ is a cloud-based and continuous testing platform that seamlessly automates web testing and API without writing a single line of code. As a result, IT teams of any size can use ACCELQ to speed up their testing by automating critical lifecycle aspects like test design, planning, execution, and generation.

ACCELQ customers save around 70% of the cost involved in changing and maintaining testing, addressing one of the major concerns in the industry.

Katalon Studio is a free test automation tool used to automate mobile and web applications and even web services. It has a record and playback mode that helps non-programmers to create automation test cases effectively. It also has a script mode for users with programming expertise, using which users can write test scripts in Groovy.

The Perfecto Automation tool is an entirely web-based ”Software as a Service” (or SaaS) platform that lets mobile application designers and QA professionals work with services like advanced automation, monitoring, and testing services. It is the ideal tool for a mobile application tester to automate testing for mobile phone devices linked to diverse mobile networks across different locations.

The automated testing is executed using an in-built web-based user interface design, which permits the conception of test scripts that are easy to design and use without requiring any code. The commands containing the hands are easily available on the websites as widgets. Its keyword-based Script Once technology allows engineers to create test scripts. Perfecto works on both image & text recognition.

It supports automation tests on the emulators (Android), the simulators (iOS), and physical devices (Android and iOS both).

However, selecting the right scriptless testing tool is key to accurate testing, along with many other invaluable benefits like cost savings.

Testgrid is a widely-preferred automation testing tool as it has enterprise-grade capabilities and allows you to scale easily. With only a few clicks, it lets you create custom workflows that allow you to test your application on different browsers, devices, configurations, and data sets.

All these features make Testgrid unique from other scriptless test automation tools!