There are plenty of perks for using the emulator on your desktop. From playing the high-end games to duplicating the behavior of mobile devices without the additional cost of hardware, it is all possible with the emulators. Inevitably, it helps in getting the iOS interface or experience in your Windows PC. It is a web-based IOS simulator, which offers freemium services. In the free trial, users can access it for 100 minutes to stream the games and applications. It allows you to monitor the usage and set up the alters to let you know about the time limits. It can also be utilized by the developers to stream the iOS simulators to embed the applications on the website.

To use Appetize features, you need to build your application on the Xmarin, and Xcode to test it with the Appetize. Upload your app in the format of .tar, .zip, or .targz file, which consists of the compressed .app bundle. After getting it done, you will receive an email by which you can run the application online with ease. From iPhone 4 to the iPhone XS Max, it is compatible with all generations of iPhones. There are different types of packages available for getting more access to the Appetize. You can buy the premium package to enjoy 2000 minutes for a month. Unlike other emulators, this one does not have a built-in development environment. It is generally used by the developers to test the cross-platform mobile and HTML applications without coming across several complications while setting it up. It can be utilized as a chrome extension, which makes us evade various system installations. Some of the features of Ripple include Dom inspection, HTML, JS debugging, and HTML Dom inspection. A major drawback of the Ripple emulator is that it has not been updated in a few years and does not provide support. Interestingly, Xcode is a free emulator developed by Apple. Thus, it makes it the best iPhone emulator for developers. You get a full integrated development environment in the Xcode emulator. If you are primarily using the Xcode for the development of an app, then it is simple to emulate contrasting interactions such as device rotation, taps, scrolling, and plenty of other activities and actions performed by the users. Mac users can run this application directly from the Xcode project with ease. We did not find much difference between an actual iPhone and an iPhone emulator in terms of performance. It works only on Mac systems. 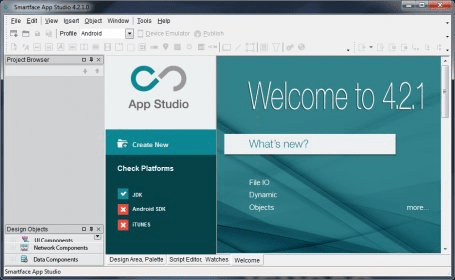 Smartface is a user-friendly emulator. It is considered as an ideal emulator to test the applications of cross-platform. Smartface is preferred the most by the developers to test the applications at a contrasting resolution for several iPads and iPhones. Some of the features of Smartface include functions as an Android and iOS debugger. It is packed with all of the features of iPhones. It is often updated to match with the operating system update. It works only on apple device lacks performance for CPU-intensive apps. When it comes to the iPhone emulators, iPadian is considered as one of the most popular platforms. It comes with a clean user-interface, which seems very similar to iOS. Since it not free, you may have to shed $ 20 to get full access. The only drawback is, you can’t access the App Store. The best features of the emulator include the simple user interface. iPadian can be used to play numerous games. Also, it consumes very low resources. It works well on both Windows and Mac systems.

If you have used Adobe Air Framework, you will find Air iPhone easy to use. Both work on the Air Framework. The Air iPhone replicates the user-interface of an iPhone and doing pretty good at its job. It also works as a testing platform for developers.

Most of the iPhone emulators listed are available free of cost and deliver satisfactory performance. Others that are paid versions come with an option to select the trial period. Most of these are also for the app developers who want to test their applications. We found some of the emulators were difficult to set up and looked like not for regular gamers. Like we said earlier, iPhone emulators are not easy to find and not easy to operate.